When I googled echidna crafts, there really wasn't much to pick from. Apparently, echidna's don't inspire crafts. That's okay. We will have to come up with a few of our own. For next year, I might broaden my search to include hedgehogs - which of course and not at all the same animal but with a few tweeks things could be adapted for our purposes :-)

Anyway, here is a paper plate echidna that Amelia and I made last week. It is a paper plate cut in half and then stapled together. We painted it brown and made a pointy nose from an egg carton and the spines from fringed paper. Amelia decided it needed a googly eye and also decided it needed a tail. Echidna's do not have long tails like this, but she thought it looked good so we went with that :-) 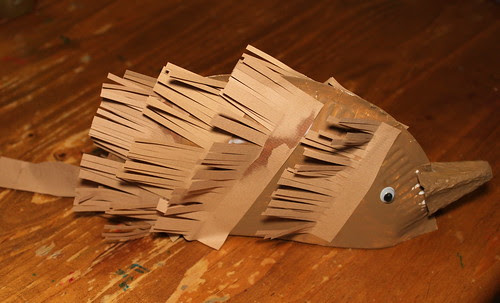 Another paper plate craft now. Esther came up with this one all by herself. She made a paper cone nose and stuck paper spines all around. Amelia wanted one too so Esther made the paper cone for her and she worked on the rest herself. I think maybe a little brown paint would've made a bit of difference. They look a little... creepy. But they are very proud of what they made and that they did it all by themselves. It was a late in the day - should be going to bed not crafting craft. 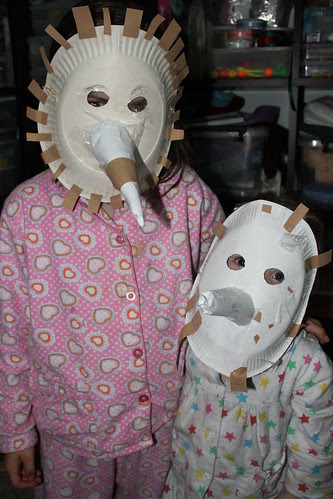 I made some paper cut outs of echidna's too, (which I don't have a photo of because for some reason it won't load up). I had the girls draw on them what they were thankful for and we strung them up on the wall at the end of the dining table. I will take them down and put them into my scrapbooks (at some stage) and we can see what the girls were thankful for this year. It would be a good way to record each year what we are thankful for.
Stick around for my echidna stitiching project...
Posted by Mid-Craft Crisis at 1:15 PM