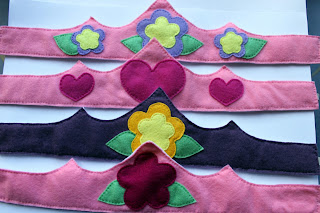 My favourite thing to do is sit and stitch running stitch through felt. It is satisfying and soothing. If I am feeling blue and I need a pick me up, this is one of my go to things to do. Of course, I need a plan of what to make. And it helps if it is already cut out. And I have the right colour cottons. And have the concentration skills to sit and do it. Basically, I need everything to line up and it's a great thing to distract me from blueness... 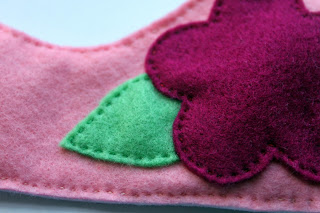 The sense of achievement once I have stitched the pieces together to create a thing is really something though. I like to turn it over and study my stitch length and make sure I have done a good job. My house probably looks like a cyclone has just gone through. And I may not have decided what to make for dinner and it's past six o'clock. But if I have spent time stitching, I am doing okay. 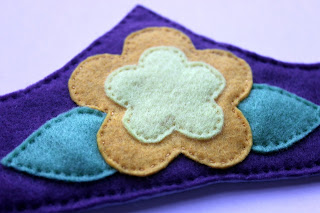 It's not just felt tiaras that make me feel like this, though these were fun to make. Matching colours for the tiara and the flowers and hearts out of my felt collection is a great way to pass time too. Felt is one of my happy places.
Posted by Mid-Craft Crisis at 9:00 AM No comments:


...and I have been absent. I am determined to find my life again so I am trying to blog again. Blogging was a good thing for me when I was here a long time ago.

Since I've been gone, we were involved in a campaign to get a life saving drug added to the PBS in Australia. It was to benefit a small percentage of people with Cystic Fibrosis. People with the right gene type. Amelia is one of these people. After over 2 years of campaigning with some awesome people in the Cystic Fibrosis community in Australia, WE GOT IT!

Amelia started on Kalydeco almost a year ago to the day. We had hoped it would cut her medication intake dramatically. This hasn't happened but it has made a huge impact on her health. And we are confident that her health will continue to improve while using Kalydeco and as new therapy's and drug's become available.

I didn't want to come here to blog because it felt like that is all that was going on. Billowing dark clouds of depression. And a few clouds of anxiety thrown in for good measure. I have struggled for quite a few years now but the last 2 have been the most challenging. The plastic smiles only go so far.

I have dragged myself through so many days. And I have tried my best to keep the depression from everyone I know. I have let a few people know. There is a stinging stigma with mental illness though. I don't know whether to make it known or not. And as much as the hashtagging of ending the stigma may be shared on social media, when it is your own walk, it's harder to be honest. That's how I have felt anyway.

So for better or worse, I am saying it here. I have depression. Sometimes things are okay. Sometimes they are not. I have piles of emotional baggage that I am dragging around and I am done hiding from it.

Here is my plan. Mid-Craft Crisis will continue as that. I will talk mid craft and crisis. I would much rather talk about my crafting attempts than depression. This is always going to be a crafty blog but I am also going to start talking about real stuff. Not fake. Because I have less energy for fake than I ever have. And maybe I can turn this hideous depression journey into something useful.

I have been quietly making and creating while in my time away from here so I want to get back to taking pictures of pretty things and sharing my makings. So to get started, here is a bunch of pin cushions I made recently for a market stall I was involved in. That can be another post. 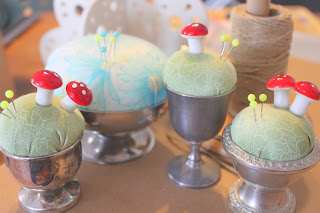 And until I get back again, be kind to yourself. I am trying to learn that.
Posted by Mid-Craft Crisis at 10:29 PM No comments: After seeing Mel from One Crafty Mumma was hosting a crochet and knit dish cloth swap, I thought I would take my new crochet skills out for a spin. I signed up. I took too long to finish them for the first round swap so I worked to get them done for the second swap. Phew! Just in time.

I was so proud of myself for making this, I really wanted to keep it. The first dish cloth is made with 100% cotton I found at Spotlight. It is a mixture of a grey 4 ply ball and variegated greens and grey 4 ply ball.

I searched for 100% cotton that was 8 ply in town but 4 ply was the biggest I could find. I am embarrassed to say that I drive past the turn off to Bendigo Woollen Mills whenever we head into town and it never occurred to me to check for yarn there. 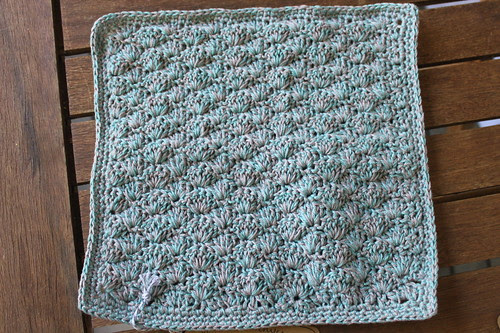 The top 2 dish cloths are made to this pattern. 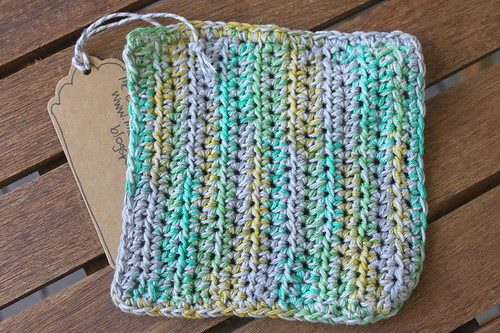 This small square one confused me to start with. I got my stitches mixed up and ended up making one that was rectangle shaped. I decided to finish it off and use it at home. Sort of a happy accident. You can find the pattern for this one here. 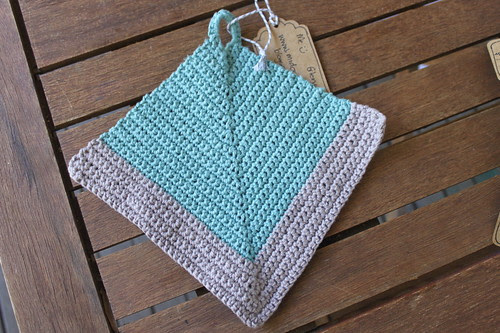 This one didn't quite go to plan either. I guess I am still getting all these stitches figured out. This was supposed to have more ridges but I didn't put the crochet hook in the right place and this is what I ended up with. I like the colour blocking on this. The pattern for this can be found here. Looks like the pattern for this one is now only available for purchase.

I wish happy cleaning to the people who get my crocheting in the swap. :-)
I am excited to see what arrives in the post for me.
Posted by Mid-Craft Crisis at 7:30 AM 1 comment: 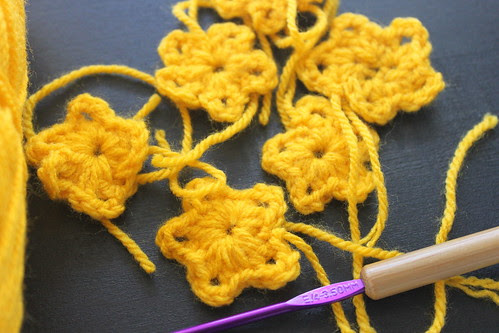 I have this idea in my head of having beautiful handmade Christmas decorations for the tree this year. Or cute gift tags that include a little crochet star.

I don't know if it will happen but these stars come together in a tiny chunk of time (maybe 10 minutes). They are handy to have for car trips and filling a little bit of time while dinner is cooking at night. I also took them when I visited with my parents recently. We sat and chatted and I crocheted.

I would love to turn them into a garland. They might just end up not finished off properly and tied to the tree :-)

If you want to make some the pattern is here.
Posted by Mid-Craft Crisis at 7:30 AM No comments: 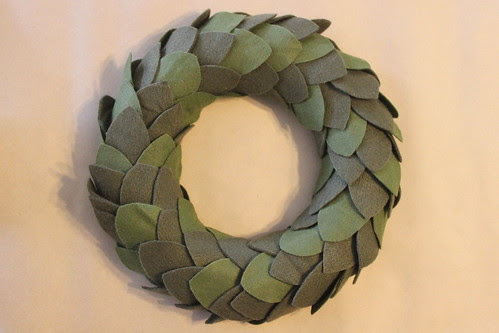 I have been determined to not let Christmas sneak up on me this year. I know. It shouts it's coming from around September when the decorations start showing up in the shops. My plan has been to start making, buying and preparing for Christmas early this year. Well, earlier.

This wreath was super easy to make. I haven't decided what to embellish it with though, if anything. I really like it like this actually. I followed the tutorial here.

In a fit of decluttering at the start of the year I went through our Christmas decorations and donated a lot of the ones we had because I didn't like them much and was determined to make some. Christmas is almost upon us and I haven't made any. Looks like things will have to get busy in our house in the next month!
Posted by Mid-Craft Crisis at 7:30 AM No comments: 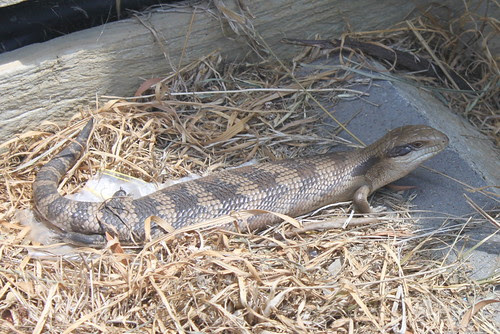 When the weather warms up here, we start to see creatures around the yard. This little guy was just out near the back deck.

There is an old wives' tale that if you have lizards around, you won't have snakes. I wish it was true.

Summer is coming.
Posted by Mid-Craft Crisis at 7:30 AM No comments:

Crochet, I have conquered. 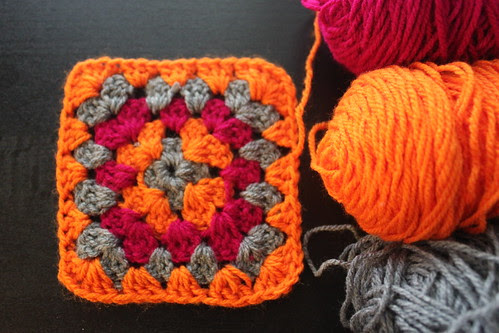 One of my goals in life has been to learn to crochet. I have tried a few times before but I haven't really ever "got it". After a friend shared a link on facebook about crochet lessons happening in town, I jumped at the chance.

This granny square was the result from my first 2 hour lesson. And I could read the pattern. I felt so clever. I also learnt that day that wearing my glasses for crocheting is very important. Migraines come from not wearing them :-( 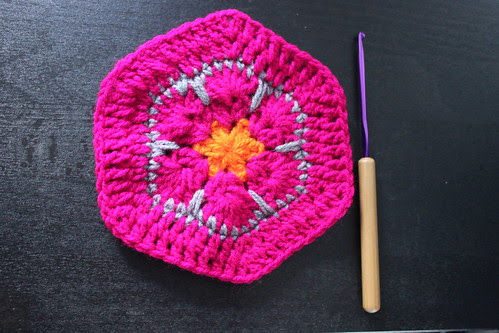 My 2nd lesson, with glasses on, I achieved an African Flower (a little wonky but hey I'm a beginner). I was supposed to make 2 and put them together to make a potholder. Confession. I left it mid-craft because I wanted to move on to more exciting things. Typical me.

The 3rd lesson was how to make a Christmas decoration. It was quick to make the two sides but we ran out of time to do the edging and I had to figure that one out on my own. 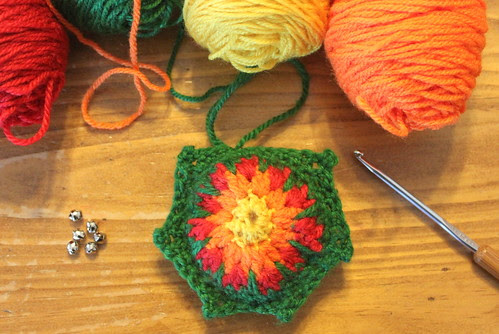 It is supposed to have six points and then I can sew the little bells onto each point. Straight forward? I have already pulled out the edge quite a few times and when I start it again, it comes out differently each time. I am pretty close to leaving it as a circle ornament and not a star.

There you have it. I am glad I took the classes. I tried following lessons online but for me it was too hard to set aside the time to do it. It was easier to book into classes and then have to go. I feel like I can have a go at most basic patterns now though. And it was fun hanging out with like minded crafty people.

My crochet skills will take more practice of course. And now that it is coming into summer, I doubt I will feel as keen to work on it. I really want to try making some baby blankets but with my track record, it probably wouldn't be a good idea :-)
Posted by Mid-Craft Crisis at 1:05 PM No comments: