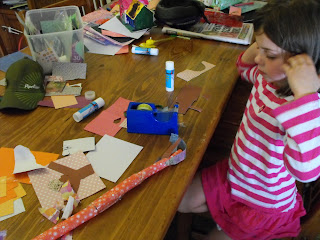 This afternoon, the kids decided they needed to do some making.

Esther and Ellamay are desperate to have a pretty bedroom. Their room is fairly bland, aside from the graffiti on the walls that they have added to over time. I have always had grand plans for their room but we have such a small house, there is no where to move them to in the meantime and who has ever had the time to decorate since they came along anyway. 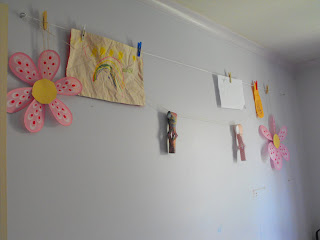 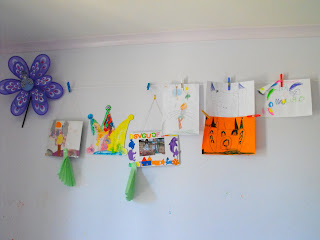 Tim just recently put up a string line for them to hang their artworks on. I wanted something like this but cheaper. I have a few more things I would like to do with their room but in the meantime, Esther and Ellamay can make things. 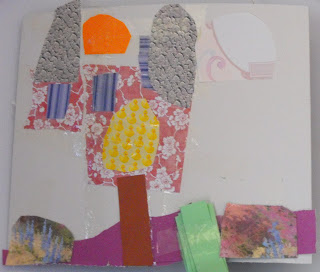 Ellamay has been a bit more interested in making art for her wall. She is into castles and princess' in a big way so that is what is on the wall. This is a collage castle she made. Clever! Esther made some paper lanterns and has them on a string to decorate her wall. We also recycled her broken wind mill into 2 flowers. They turned out quite well. I am hoping to get them interested in making some more things. They got some mosiquito nets for Christmas but we are waiting for Daddy to put up some hooks.

The 3 girls also watched Barbie and the 3 Musketeers. They got it for Christmas and they LOVE it. This is Esther with her "ribbon" (string) twirler weapon. Ready to extinguish candles and trip the baddies. 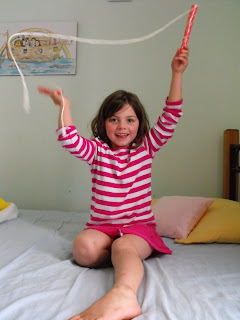 Here is Ellamay's design for a mask like they wear on the movie. 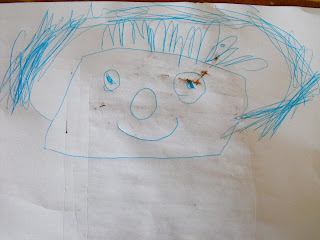 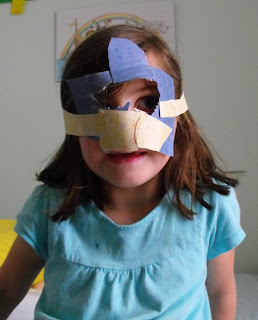 And the finished product. We have such clever children. They make me laugh.
Posted by Mid-Craft Crisis at 7:15 PM