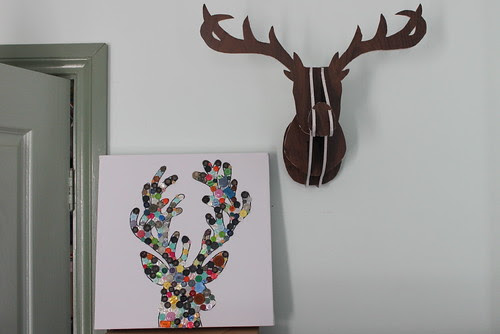 While the kids were sick, I was desperate for some kind of crafty break. I haven't really had much time lately on the crafting and it is really sending me crazy!

I sent the kids outside to play and get some fresh air, then I set to work. I don't know if I have mentioned this before but I am completely addicted to Pintrest. It is just the way I would like to view the internet. I found a great picture on there of a button covered canvas making a picture of a deer head. I thought it would make a great addition to my deer head wall in the office (which only has one deer head at the moment).

I had a canvas, buttons and I was given a big container of mod podge for my birthday this year. I googled deer head patterns and came across this one for a cushion cover (now also on my to-do list). I printed it out and traced it onto the canvas with pencil. I went over it in black marker and then got to the buttons.

I think I'd like to make another one, in reverse, but with only brown buttons. That would be fun. It was a nice quick craft and I am a fan of that!

I showed it to Tim and he described it as "interesting". Ha! I don't think he quite understands my fascination with the deer head. I think they are just so weird and ridiculous and that to me is a perfectly good reason to have it on my wall. Get it?

I have so many things to post... Tomorrow is Echidna Day again. Can you believe it is 12 months since the last one? I am hoping we will get to go on an adventure for it... but it will depend on the weather a little. The kids have been creating a few echidna type things today that I will have to get pictures of. Hopefully, I will have some pictures to post of the day at the start of next week. Until then, have a great weekend.
Posted by Mid-Craft Crisis at 12:23 PM