Here is the latest project I have been working on. My new (hopefully improved) notebook and pen holders. 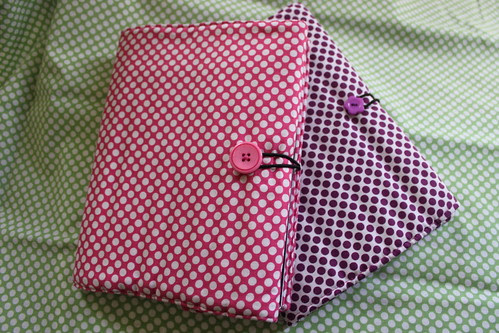 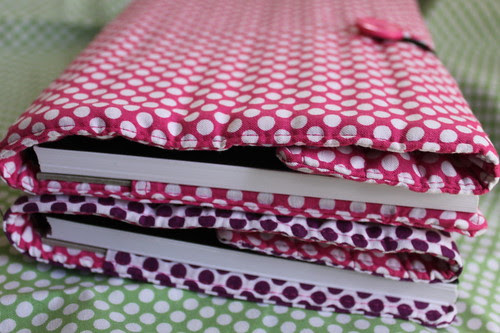 When I made the notebook and pen holders for Esther and Ellamay's birthday's last year, I followed a couple of tutorials I found but mostly just made it up as I went because I wanted the notebook to be held in a different way. The way I made the last ones only had space for ten pens too. I had bought packs that had twelve pens. My solution to this last year was to leave out the grey and the dark blue pen. I figured they would use the other colours more and they could have the extra pens if they wrecked any of the ones they had. This time though, I decided I would make the holder have enough spaces for the full set. 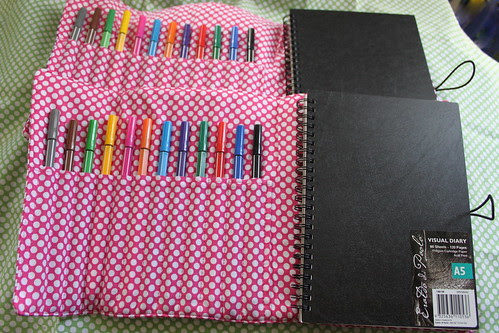 I measured and figured and made a pattern. I wasn't really sure how it would end up but I didn't let that stop me :-) Once I had finished the sewing I put in the pens and notebook. It didn't look right just having it folded in half so I just folded the pens on top of themselves to put it away and think about it for a while. I kept coming back to it and decided that it looked pretty cool they way I had packed it up. So there it was. I attached the button and smiled. A finished project. 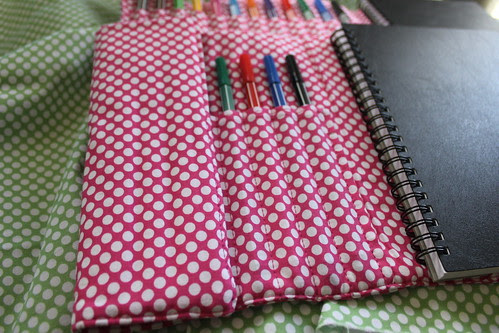 I made two pretty quickly (aka: over a couple of days - I had help from Amelia you see) and have two more cut out ready to sew. I now have an excuse to go and buy some more colours of this fabric. The little girl who received the pink one loved it which makes me happy that I persisted with the project and that it didn't disappear into the mid-craft pile (as so many projects often do). And Esther and Ellamay told me that everyone in their class wants one now. It looks like I will be getting a lot better at sewing these too :-) 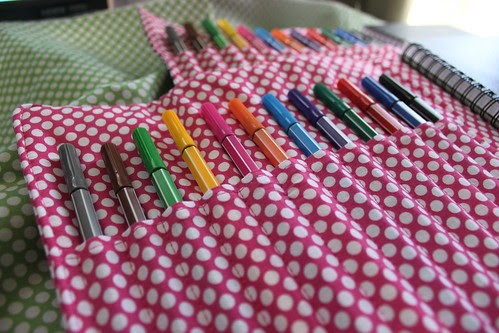 Meanwhile, don't you just love pretty pens all lined up. I do. Stationery is lovely. I think I might add one of these for me to the list. I deserve one too. What colours to make it though?
Posted by Mid-Craft Crisis at 7:20 AM