When Amelia and I were out shopping last week we had to buy a roll of wrapping paper. Amelia insisted upon carrying it. Well, it was more like riding it. For some reason, when she sees a long roll of paper she sees a horse at the moment. As soon as we got home, I asked if she wanted to make a horse. She was very excited to make her own horsey.

I found a long cardboard roll in the cupboard that I'd been saving up from a fabric bolt. Then we got onto Google and looked up "horse head template". We found a hobby horse craft with a printable horse head which was perfect for ours. 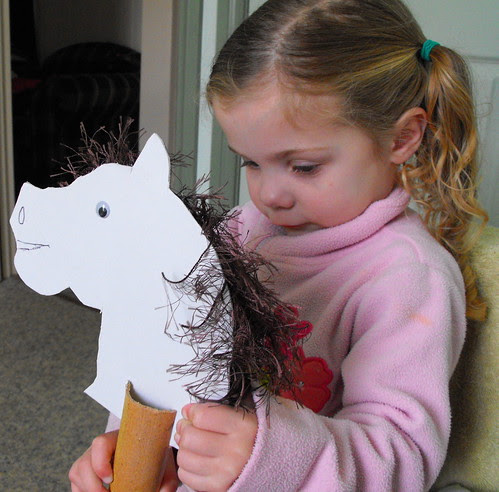 I had to enlarge the copy that we made because it was too small for our horse. I traced the head onto two pieces of scrap photo mat board (my favourite craft material!) and cut it out. We cut some brown yarn and glued it in between the two cut outs with white PVA glue. We found a googly eye and glued that on and then I cut a slit in the top of the cardboard roll and we slotted the head into it. More glue. And then one happy little girl.
Amelia rode the horsey around and around the house and when her big sisters got home from school, they wanted to make one too. Instead, they ended up colouring in the one we made. Ellamay made a bed for it so it could have a sleep. It looked kind of creepy lying on the pillow like that :-) They thought it was wonderful though. 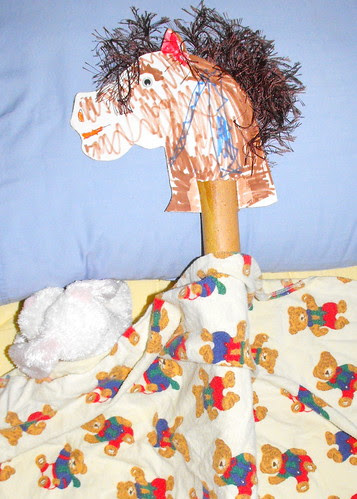