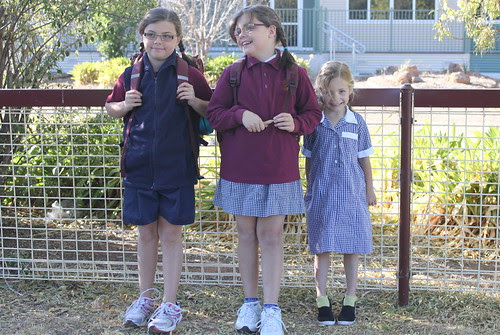 Well this is a great beginning to the year, isn't it? It's already half way through February and I am only here for the second time. Oh well. Even if I only post once a month this year, I am probably doing better than last year. :-)

I must admit, it is strange not having any kids left at home during the day. I didn't cry when I left my littlest girl at school. I thought I would. It has been a bit of a ride so far though. After two and half weeks at school, I have had two phone calls in two days to come in and pick Amelia up. She has been having tummy troubles again. *sigh*.

The teachers have been fantastic after their crash course in Cystic Fibrosis (CF). It has only been since I have had to go through all the things they need to be aware of, that I have realised that I have a lot of stuff to remember and do each day. I guess I should be a little easier on myself for having the peaks of Mount Laundry sitting in our bedroom waiting to be folded and the mountain ranges of Unclean Laundry still waiting to be washed.

The most favoured question people ask when they find out that your youngest child is off to school is: "What are you going to do with all that time on your hands?" I thought up a list of responses because, you know, I was going to have all this time on my hands. I am not sure when that will kick in. It hasn't yet. Maybe once there is some kind of routine? I live in hope :-)

One of my plans for the year "with so much time on my hands", is to work on my inner (and outer) domestic goddess. In theory, between school times I should be able to have a tidy (ish) house, bake up a storm and enjoy a little "me time" (another phrase people have been throwing around!).

I finally had a go at changing my blog a little. Not sure if it will stay this way but it is another thing to work on in my abundance of spare time now :-)

Posted by Mid-Craft Crisis at 5:59 PM