If you go into the lounge room today...

We gained a new family member at Christmas. He is huge. 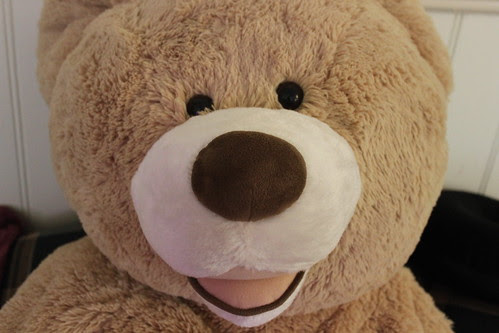 Do you know the kids show The secret world of Benjamin Bear? The kids love it and I think its fun too. I kind of think this is what our new friend is like. He secretly comes to life when we aren't around. He hasn't really got a name so far. The kids have come up with a few but nothing seems to fit. We call him 'the big bear' or 'Mr Fluffypants'. Not sure how that one came about.
Even the size he is, he still ends up in some odd places and positions. He was lying on the couch one day with his paws under his head and his legs crossed. He was taking a nap I suppose.
The kids like to wrestle with him because he is such a big bear. Although if Ellamay is to be believed she didn't wrestle with Bear, "He wrestled with me". :-)
He has also become a favourite place to sit and watch television. 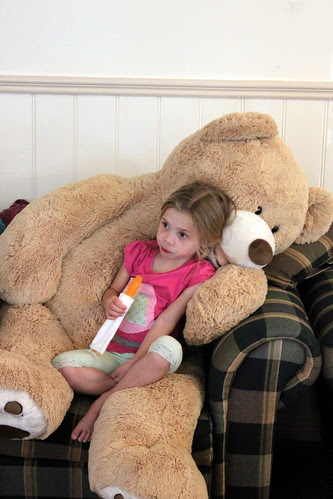 One night I had prepared the couch for Amelia so we could do her physio before bed. When I left the room, she was lying on top of the pillows, all sleepy and snuggled up. When I came back, I saw this. 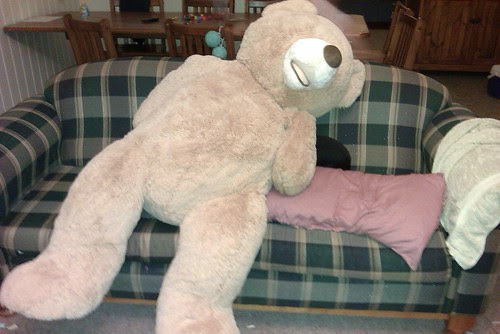 I wasn't sure how he would fit into our little house when he first arrived... but he has certainly made himself at home :-)
Posted by Mid-Craft Crisis at 7:00 AM